Electric utility PacifiCorp has tentatively agreed to remove four dams from the Klamath River, in a deal that would end one of the West's most rancorous water disputes and could serve as a settlement model for similar fights.

Under an agreement in principle announced Thursday, PacifiCorp, based in Portland, Ore., would tear down the dams on the Klamath River in Oregon and California by 2020. That would open up 300 miles of river to salmon and steelhead runs that could help restore depleted fisheries in Oregon and California. The dams, which were put in over the past century, prevented the fish from migrating farther upstream. 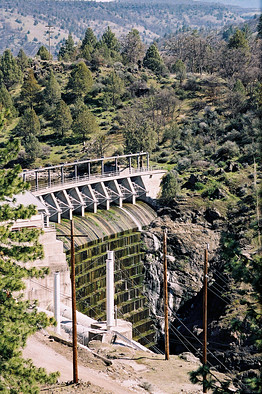 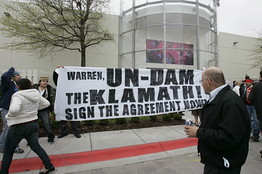 The Copco No. 1 dam outside Hornbrook, Calif., shown in 2004, is one of four being dismantled. Protesters this May sought the dams' removal.

The hydroelectric power that the dams produced -- which amounts to about 160 megawatts, or less than 2% of the utility's total capacity -- would be replaced with energy from solar, wind or other renewable energy sources. PacifiCorp, unit of

Berkshire Hathaway Inc., would pay up to $200 million of the estimated $450 million cost of the removal, passing on its portion to ratepayers. The state of California would pay for the rest.

The framework of the deal "ensures that our customers will be protected at every step along the way," Greg Abel, PacifiCorp's chairman and chief executive, said in a prepared statement.

The deal between PacifiCorp, the Interior Department and California and Oregon was reached after three years of negotiations with environmental, tribal and farmer groups. The parties hope to finalize the agreement by June. The dams' removal is subject to approval by federal officials, after reviews that are expected to take four years.

"This marks the first step in a future process, but it's a giant step," Interior Secretary Dirk Kempthorne said at a new conference Thursday.

Oregon Gov. Ted Kulongoski added, "While many months of work [lie] ahead, this historic agreement provides a path forward to achieve the largest river and salmon restoration effort ever undertaken."

Most groups didn't get everything they wanted. The American Rivers environmental group, for example, was pushing for the dams to be removed by as soon as 2015. And farmers who depend on irrigation from the river stand to get less water in dry years than they do now.

But most of the parties sounded pleased that a deal could be reached to end the dispute.

The conflict turned so ugly in 2001 that federal marshals had to be called in after angry farmers seeking water turned on spigots that the U.S. government had closed during a drought year.

In 2002, environmentalists became enraged after tens of thousands of salmon died in the river when the government diverted more water to the farmers.

"The bottom line is we tried to find common ground and compromise, and that is the only way something like this could have happened," said Martin Goebel, president of Sustainable Northwest, a Portland-based environmental group.

Write to Jim Carlton at